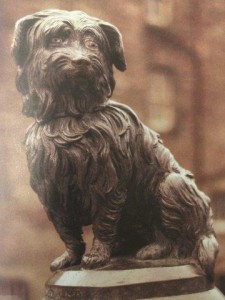 In the city of Edinburgh, Scotland, everybody knows about Bobby. Visitors like to see his statue standing in the city. The monument to Bobby is a fountain, and on the top of the fountain stands a bronze statue of Bobby. Now, this Bobby is not a boy, but a dog – a Scotch terrier whose story is very intersting.

Years and years ago Bobby and his master came regularly into the marketplace near Greyfriar’s church in Edinburgh. In fact, everyday wehn the big gun at the castle boomed out at noon, Bobby and his master crossed the marketplace to Traill’s restaurant for lunch. Bobby was always given a bone and a piece of bread for his lunch.  This continued for some years. Then one day Bobby’s master died and was burried in Greyfriar’s churchyard nearby.

Three days after the funeral, when the big gun went off at noon, Bobby showed up as usual at the resaurant, a picture of hunger and grief. The kind owner recognized him and gave him his usual bone and piece of bread.  The next day,

the dog came again, and the restaurant owner became curious and followed him. Where do you think Bobby went?

That’s right. He went straight to his master’s grave in the churchyard, where he ate his piece of bread and then lay down with his bone to keep watch over his master.

Some people took Bobby home with them and cared for him, but he woudn’t stay at home. Three times he made his escape, and each time he came back to the churchyard to continue his watch over his master’s grave. Now there was a sign on the churchyard gate. „No dogs allowed.“ But the old man who looked after the grounds was too kindhearted to make Bobby go away. So there he stayed, day and night, taking refuge in the shelter of one of the big grave stones when there was a storm. No one could coax him away, so a little house was build for him, and every day at noon Bobby trotted from the churchyard to the nearby restaurant for his dinner – a bone and a piece o bread.

After some time, a new law was passed requiring all dogs in the city to be licensed and to wear a collar. Bobby had no license, of course, so he was picked up and taken to the animal shelter.  What do you think happende next?

Bobby had become so well known by this time that the mayor of Edinburgh himselfe paid the license fee for the little dog, and he kept on paying it every year. He also bought Bobby a shiny new collar, which you can see today in a museum in the city.  So, Bobby took up his watch again beside his master’s grave, and there he stayed until his death.  When Bobby died, he was buried beside his master.  His friends put up a small headstone in his memory And on the little fountain at the street corner near the churchyard, where the bronce figure of Bobby still keeps watch, you can read these words:

A tribute to the affectionate fidelity of Greyfrar’s Bobby. In 1858 this faithful dog followed the remains of his master to Greyfriar’s churchyard and lingered near the spot until his death in 1872.

From the inscription, can you figure up how many years Bobby watched beside his master’s grave? That’s right! From 1858 to 1872 is fourteen years.  For fourteen years – day and night – the faithful little dog remembered his master and stayed close beside his grave!  Isn’t God good to give us such faithful and loving pets?  And just as this little dog loved his master and obeyed and honored him, you can love and honor your mother and father and brothers and sisters. You can be faithful to them and show them every day how much you love them.

° What can you do today to show your family that you love them?

° Do your friends know they can count on you?